Love in a Time of Artificial Wombs

Love in a Time of Artificial Wombs

Writing from a country straddling both the Arabophone and Francophone Worlds and often forgotten by both can put Mauritanian authors in the position of having to ‘explain’ their country through their work. Thus most Mauritanian fiction seems almost obsessively ethnographic, usually describing aspects of one of the country’s traditional cultures or occasionally life in the chaotic capital. In Al-hubb Al-mustaheel (“The Impossible Love,” 1999), however, Moussa Ould Ibno breaks away from this trend and instead uses Science Fiction to comment on ethical questions spurred by reproductive technology, as well as timeless questions regarding the nature of love. 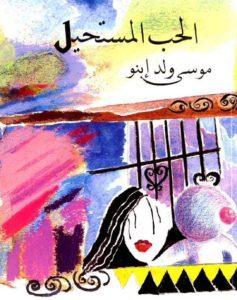 Al-hubb Al-mustaheel begins with a father impatiently awaiting the birth of his first child, an event simultaneously momentous in a life and banal in its universality. It is then revealed that this soon-to-be-father had to wait four years for an incubator to become available so he could have a son. In the following chapter the history that led to the preponderance of single-parent birth and child-rearing is explained, beginning with the advent of technology that enabled couples to select the sex of their child. This led first to a gender imbalance in favour of males, and then to a war between the sexes over controlling the means of reproduction. This war lasted until the brokering of a truce which hinged on the destruction of the family as a social unit and the creation of two separate societies: one for women and one for men.

Romantic love is now regarded as an illness and delusion, and interaction between the sexes occurs only during the period of “mixed service.” During this time, enlistees are monitored closely to ensure that they showed no signs of love or affection towards their assigned sexual partners. It is believed that allowing love to be associated with reproduction would lead to the desire for family and the return of war and chaos. The protagonists, Adam and Manki, fall in love during their enlistment and find themselves forced into ‘rehabilitation.’ This prompts both to question the nature of love, especially whether it exists outside of physical desire and whether it can survive in the absence of the beloved. They each find different solutions to escape the torturous rehabilitation program without being completely brainwashed.

Ibno makes abundant references to Greek mythology and philosophy throughout Al-hubb Al-mustaheel. For example, at a critical juncture during Adam’s ‘rehabilitation,’ one of the characters retells Plato’s story regarding the origin of love (1). Additionally, there is a humorous scene from Adam’s childhood wherein he tries to understand what exactly adults want from him when they tell him to “be a man.” After Icarus visits him in a dream and tells him to build wings, he concludes that the adults want him to fly. As the classic Greek corpus reached Latin literature and then European cultures through Arabic translations, such references emphasise a shared aspect of our literary heritage. Referring to ancient philosophical conceptions of love in a tale that pathologises reproductive technology also gives the impression that antiquity had a stronger understanding of human nature.

Another interesting aspect of the novel is its bilingual origins. Moussa Ould Ibno originally wrote Al-hubb Al-mustaheel as L’amour impossible and, along with another one of his novels, he re-wrote the story in Arabic a few years later. According to a study by Mohammed Lamine Ould Moulay Brahim, the story and events remained the same between the French and Arabic versions, but the narration was ‘Arabicised’ and not simply translated passage-by-passage (1). Thus it could be considered another example of a self-translation. There was also a rumour that Moussa Ould Ibno created the Arabic version of the novel by telling the story in the Hassaniya dialect to a friend who then wrote it down in Modern Standard Arabic, which would link it to both the Francophone and the vernacular literary worlds of this diverse country.

The story of Al-hubb Al-mustaheel is commonly interpreted as a commentary on gender and sexuality in a conservative society (3), but it can be difficult to ascertain what Ibno’s stance is exactly towards issues like homosexuality and sex segregation. Regardless, Al-hubb Al-mustaheel is an engaging novel with a clear and descriptive style. It is a story made to travel easily between languages.

July Blalack is researching North African literature for the European Research Council’s MULOSIGE project. She is a PhD candidate at SOAS, and her history of Mauritanian prose was recently published in ‘The Oxford Handbook of Arab Novelistic Traditions.’ You can read more of her work on the MULOSIGE website and on Academia.edu.