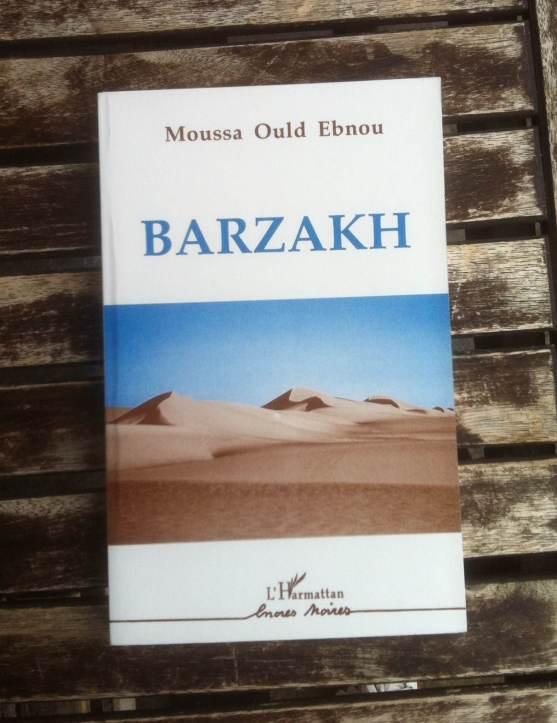 “Was I the pagan adolescent Gangara that lived a carefree existence in the golden country, the African savannah, or the Muslim slave that was crossing the great desert towards an unknown destination, or was I this being inhabited by extra-terrestrial elements and who was glimpsing other horizons? Maybe I was all three“

Finding a book for Mauritania was tricky. Perhaps unsurprisingly Mauritanian writers in translation are few and far between and Moussa Ould Ebnou (pictured below), described as one of Mauritania’s greatest and most innovative writers has yet to appear in English, hence the need to read this book in French. 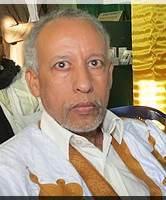 After reading a description of this novel on goodreads.com, which states that Ebnou “weaves masterfully together science fiction and mysticism, history and myth, truth and fiction, philosophy and literature” I felt compelled to buy and read it and I must say I was not disappointed.

Firstly, the innovative technique that Ebnou employs is fascinating, he has structured this novel to reflect how traditional Mauritanian music is played. Dividing the narrative into three parts: ‘the Black Way’, ‘the White Way’ and ‘the Milky Way’, each representing a section of Mauritanian society. For this reason the novel has been described as ‘symphonic’ in structure.

Secondly, the fact that this is a science fiction book is staggering. Not so much because African science fiction is still relatively rare (or Afro-Science fiction), despite recent successes (see here); but the detailed and rich infusion and integration of sci-fi elements with the natural desert landscape and Mauritanian society and culture was a joy to read.

Thirdly, the blend of historical fact with myth, religion and philosophy created a distinctly unique reading experience with diverse interpretations that I am still reflecting on. For instance, if we take the title ‘Barzakh’ – the literal Arabic meaning of Barzakh, is “obstacle”, “hindrance”or “barrier” but has come to mean the Islamic purgatory, the barrier between the physical and spiritual worlds, in which the soul awaits after death and before resurrection on Judgement Day. It is also fittingly applied to the physical desert landscape that the majority of the book takes place in,and perhaps the moral landscape as well, at one point a character states: “This land is a purgatory long abandoned to anarchy and corruption“.

To give you a brief summary of the novel so you know what I’m talking about, the novel begins with members of the “Institute for the Archaeology of Human Thought” digging up skeletons buried in the desert, using  futuristic scientific means they are able to recreate the consciousness of one of the skeletons at which point the novel jumps thousands of years into the past.

It is at this point in The Black Way we meet Gara, an adolescent Gangara taken as a slave by traders in a salt caravan after being sent by his father to purchase salt. For the remainder of this first section, Gara is a slave to a master and accompanies the caravan as it moves across Mauritania. Throughout the novel Ebnou describes in poetic detail the desert landscapes and in this section the people that the caravan encounters. Suffering from the physical hardship of walking for days and wondering is his father abandoned him Gara eventually arrives at Aoudaghost, where he is sold to a new master and must learn Arabic and the Koran, eventually becoming renowned for his theological knowledge (although initially Gara has “no liking for this religion the discovery of which coincided with my misfortune“). While there he meets Vala, a Berber woman with whom he starts a relationship and who becomes pregnant with his child.

Horrified by the conditions and the misfortunes of the slaves, Vala easily convinces Gara to join a slave revolt and takes him to see her future-telling grandmother who does not foresee good things (in fact she predicts that his son will kill him). Before the revolt can begin the plotters are betrayed and Gara is captured and taken away into the desert again, he escapes and after three days without water all the while lamenting the evil nature of human beings (“I was not able to justify the persistence of human beings“) he encounters the angel of time Al-Khadir.  The angel offers him an escape from his torment and says he can transport him into the future up to two times if he wants to try and find a time where humans lives peacefully.

Accepting the offer, in The White Way, Gara is transported 900 years into the future but does not remember who he is or where he has come from (apart from when he dreams). Taken up by a group of archeologists (led by a man called Ghostbuster) as they search for the ruins of Aoudaghost, Gara is once again enslaved, working for Ghostbuster’s lover Vala (who Gara suspects is a descendant of the Vala from his time). During this period he witnesses the French colonial occupation (“even the masters have become slaves, they know the worst of servitudes, they have become slaves to a foreign power“) and again discouraged by the inhumanity he sees (“what good is it to change times if men will always be bastards?“) asks Al-Khadir to transport him a final time

Finally, in The Milky Way, Gara now finds himself in a dystopian, space-travelling future where “the Democratic Republic of Barzakh” is a Mad Max style wasteland run by a dictator and the Sahara used as a dumping ground for Earth’s radioactive waste, the disposal of which is the responsibility of penal labourers. Gara is taken prisoner and forced to work and learns that the State is trying to put down an insurgency by the “Sahara Emergency“, an insurgent group composed of Nemadi displaced refugees which harries the authorities. Begging Al-Khadir to take him somewhere else but refused, Gara escapes and again meets Vala and in a dream realises that the dictator / president is his descendant (‘son’), he once again is captured and the final question of  whether Vala’s grandmother’s prediction will come true hangs over the book’s denouement.

To say this was a strange book would be putting it mildly. This novel explores so many topics and themes, from those I mentioned above (Mauritanian history, Islamic tradition, philosophy and ethics) to the presence of slavery in Mauritania (it’s no accident that the protagonist is a slave), to a concern for the environment “I imagined the prowling Fennec, its ubiquity and its nocturnal boldness broken by the hellish wall of light and steel“)  it is astounding. Ebnou is also a talented and creative storyteller and was able to keep me gripped throughout the novel.

Although pessimistic in tone, the question that Gara asks towards the end of the novel characterises the narrative quite well: “to what good humanity?“.

Although without a clear answer, all I can say is that this was a fascinating book that I would wholeheartedly recommend and will keep my fingers crossed that Ebnou’s works find their way into English soon!